At Least it Wasn’t a Last-Second Loss

Hopes for the first victory of the season seemed to have been a bit premature as the 49ers went down flailing to a meh Dallas team by the galling score of 40-10. As usual, the game started out with a big mistake. This one courtesy of Trent Taylor’s muffing of a punt after the Niners defense made a nice 3-and-out stand on Dallas’ first possession.

This led to a quick TD. The offense never got on track, and there were the usual penalties (hello Rashard Robinson) and mistakes, Brieda fumbled, but recovered, and CJ fumbled on the Dallas 8 yard line to thwart a promising drive before the half. Another drive to start 3rd quarter ended in a 4th down fail. It took a while but the defense wore down and the 49ers lost going away. The good news? No drops! Anyhow, the is was a baptism by fire for BeatHard as he was rattled, hit, and flummoxed for most of the game. The line was insanely inconsistent, and Staley, the bright spot, still whiffed completely on the CJ fumble. Tomlinson had a terrible game at guard, and Brown did his share of whiffing as well.

Overall, a bad game from a young team. The schedule doesn’t get any easier with the high flying Eagles next, on the road, and then the Cards & Giants here. Both are struggling but both are better than us.

PS.  The tribute to Dwight Clark was an awesome move by Eddie Debartolo. He flew in all the players he could from that 1981 team that was so shocking in their ascendancy. He has also been  flying Clark around the world to find the best treatment available for him.  It was also very painful to see such someone who very recently was an outgoing, energetic healthy man become so debilitated so fast. 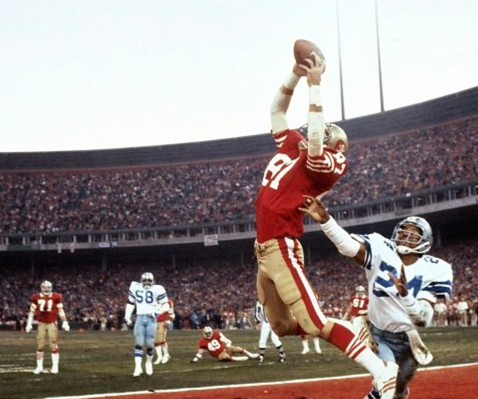