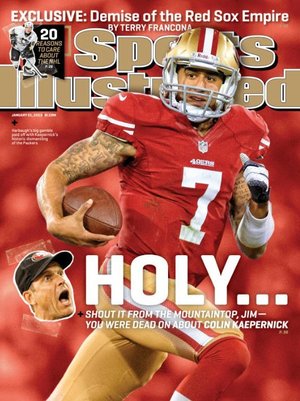 To kill the jinx, we must acknowledge it. It what must be some kind of twist of fate, the Niners are facing the Double Whammy of jinxes this weekend. EVERYONE knows about the Sports Illustrated cover jinx. And sure enough, there he is, big as life, Colin Kaepernick on the cover of SI this week. Holy . . . indeed. When was the last time the Niners were on the cover of SI? You guessed it. Right before last year’s NFC Champiomship game against the New York Giants. And we all know how that turned out.

The other hobgoblin of doom is the season-long pattern of w-w-l; w-w-l; w-w-t; w-w-l; w-w-l; w-w-l; w-w-??? 18 games into this season, and the pattern goes on. Uncanny consistency in being inconsistent. Every 2 game winning streak was followed by the NFL wonks declaring that the Niners are the best team in the NFL. Whereas they would puke on their shoes and get knocked down a peg or 3. Some losses were to good teams (Giants, Minn), some to bad (StL), and some were ugly (Seattle).

I don’t hold much truck in the fact that my actions determine the fate of my team (superstitions  being something I left behind me a while ago), but this may be the time to bring extra mojo to the table. The 49ers are 5-8 in NFC Championship games, and bring a 1-5 record in their last 6 playoff road games. Pish posh you say? Ancient history? Well, sure. But there sure seems to be a boatload of kharmic baggage to overcome in this game. So, dig out that old ticket stub, find that 26 year old t-shirt that brough you good luck in the 1994 Super Bowl game, and hope to hell these patterns don’t repeat themselves. Because as we all know, those who do not remember the past are doomed to repeat it.

137 Responses to The Perfect Storm