The venue looked great, the weather was perfect, the turf even held up after the haftime lip-synch-a-thon. The commercials were even fairly decent. Although the puppy-baby-monkey thing was stupid beyond belief. The baby trying to shoot out of her mom to get some Doritos was clever if not odd.

All that being said, I must say this was the worst Super Bowl of them all. I vaguely remember Super Bowl V where the Colts beat Dallas 16-13 on a last second field goal, but this one was bad. Neither offense did anything all day, and the stats bear this out. The winning team had 194 total yards of offense. Lowest ever for a winning team. Both teams combined for 15 punts, and were a combined 4-29 in 3rd down conversions (Denver an astonishing 1-14, or 7%). A whopping 14% conversion rate. 7 fumbles, 2 picks, and 18 penalties for 153 yards.

Sloppy, boring, and dull. Kinda like watching the Niners play this year. These defenses are great, but Carolina had a ton of chances and wasted them. At least they moved the ball occasionally. 315 yards is nothing spectacular, but it did show some offensive consistency. However, they fumbled, missed FGs, dropped passes, and committed a shitload of stupid penalties to stop themselves at every turn. They came in ill-prepared for the defensive onslaught, and appeared to be showing up to win the game, and looked like they took Denver way too lightly.

Kudos to Denver’s book-end pass rushers Von Miller and DeMarcus Ware. They harassed Cam Newton to the point of utter frustration and pouting. Very reminiscent of how the 49ers made Dan Marino look like a chump. I’ve never liked Denver, and Manning has never been my cup of tea either, but they at least took care of things and didn’t make near the mistakes that Carolina did. Their defense took it to Carolina, and they had no answers. So Carolina’s feel-good season crumbles amid their own hubris.

This one was one for the dogs. 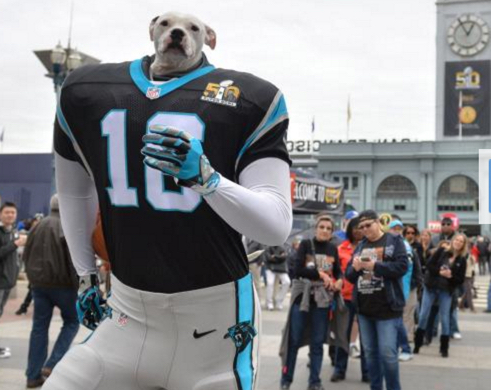