Color me unimpressed, but the Niners played a very bland ho-hum type game vs a very inferior opponent. I didn’t expect a Sea – AZ type score, but I certainly didn’t see a 6-3 half time score either. In yet another game where Fangio’s defense decided to give a young QB time in the pocket by strictly rushing 4 guys and playing soft on the outside WRs, the Niners were outplayed in the 1st quarter, and fell behind 3-0. The offense? Well, after the 1st play, a 20 strike from Kappy to Walker, we were generic there as well.  Wake caused a fumble on 3rd and 3 on that opening drive, and it was a struggle the rest of the way. There was a lot of 3 back, 2 WR formations, 2 TE 2 WR formations, and the Niners trying to run, with varying success. Early on, Miami was rushing 5 and getting through.Since the Niners had 2 TEs in there blocking, there was often no one open to throw to. Kappy took a couple needless sacks, but the WRs were covered, and TEs were blocking so he had nowhere to go. VD again spent a lot time in protection. He got 2 looks, and one catch.

The 2nd quarter was much the same. The niners didn’t let Tannehill do anything over 8 yards, and the Niners couldn’t generate much. However, with 3:15 left in the 1st half, the Niners finally took advantage of the 15 yard cusion that Moss got. The Niners quicly got down to the Miami 10 with about 55 seconds left, after LMJ made a nice catch and run in the flat and got OB.  Here is where it got stupid. Kappy inexplicably took a sack out of the shotgun. 8 yard loss.  Tick tick tick. Then Harbaugh dials up a run for a 2 yard loss. Tick tick tick. Then Kappy bascially throws one away with time juuust about gone to stop the clock. Smart, but it shouldn’t have come to that. So, they had a 1st and goal from the 11 and were able to run 2 plays in 55 seconds. Awful.  The time outs were gone of course, as getting plays to the QB in time seems to  be an issue once again.

The second half was punctuated by the muffed punt for a FG, and the 50 yard Kappy run. The Niners finally started dialing up the pressure, and got to Tannehill. Culliver made some nice plays on their deep balls, but Miami has maybe 2 third string WRs at best. Donte Whitner had the pile-drive of the day when he picked up Regggie Bush and body slammed him to the turf. Aldon Smith looked great in getting pressure. There was one play early where A Smith lined up a half-step behind and off of Juston Smith’s right shoulder. I told Garrett, watch A Smith. He’s getting in there. Sure enough, he got through for his 1st sack.

This game, while the Niners had a few big plays, ad a couple nice passes, sure felt like a preseason game. The Niners played their base D for most of the 1st half, and while they stopped the big plays, they let Miami diddle around all over the place. The offense was a staid, boring, pack a bunch of guys on the line and run up the middle thype deal a lot of the time. What was encouraging was they ran out of the shotgun more in the 2nd half. LMJ broke off some nice runs in the 2nd half as the Niner line wore down Miami’s D line. And Kappy’s keeper was nice. It was set up by a run in the 2nd quarter where Kappy handed to Gore, and faked the keeper reverse. The RDE totally committed to the run on the play. Flash forward to the 4th quarter, and they ran the same plsy, with Kappy keeping the ball. The RDE totally bought the fake to Gore, and Kappy was free and clear.

This all plays like the Nolan/Singletary ‘let’s keep it close til the end and hopefully win’ philosophy. These coaches are either playing it close-to-the-vest because of the New England game coming up, or they seriously think they can win in the playoffs with this philosophy. Well, they can’t. Not unless they score 2 or 3 times on defense.  Kappy’s stats look OK, and the numbers all look like a win, but we let a crappy team hang around most of the game. But, if not for the bungled punt, this game could have gone either way. These coaches either have to generate a real offense, or suffer the consequences. The Niners need to really open things up for Kappy. Otherwise, the QB switch is merely window-dressing.

Glaring problems? We gave up way too many 3rd down plays to Miami, and the Niners didn’t do shit on 3rd down. I don’t know the numbers, but Miami must have been close to 50% converting, and the Nners around 15%.

Here are some pics I took of the game. 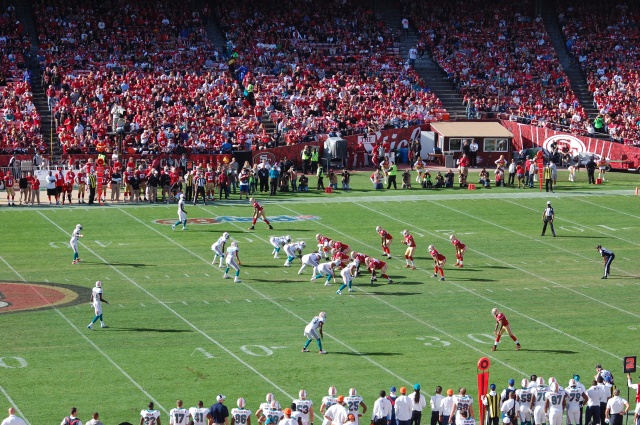 Opening drive defense – Base 3-4. Safeties deep. Bowman on Bush in the slot. Rogers backed out of press before the snap. 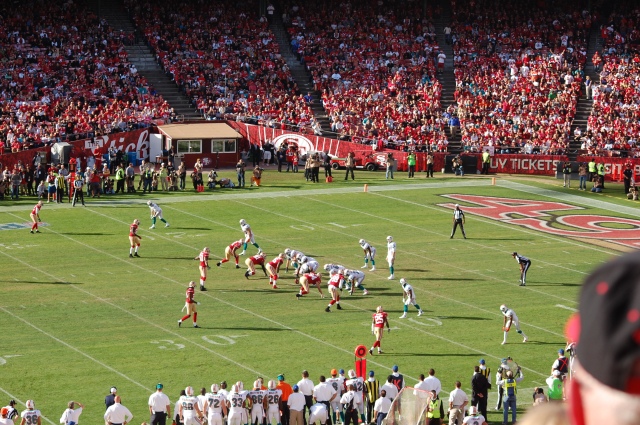 Later in the game – 5 rushers. Willis covers the strong side TE, Golsdon moves up to take the slot left WR. 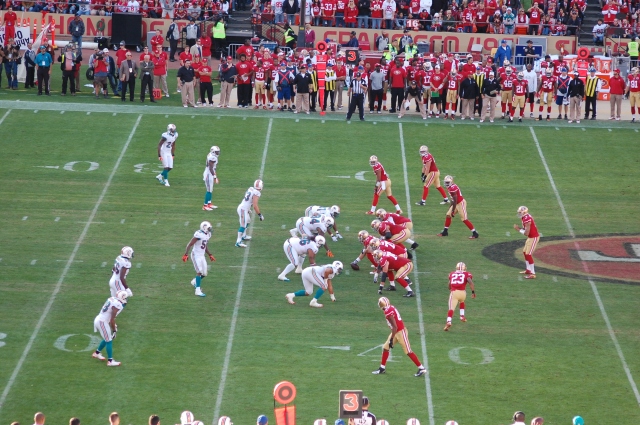 One of the few multi-WR sets of the game on 3rd and one. Didn’t make it.

Kappy throws to Miller for a 2 yard gain. The only 3rd down conversion other than the 50 yard run. 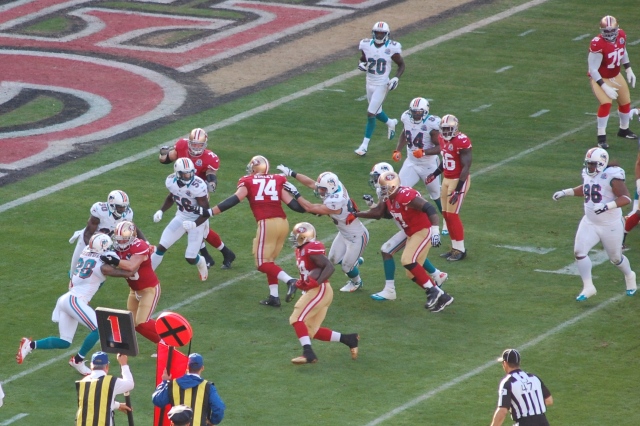 Dixon with a nice run to the one.