Passed? Get it? Yeah, shut it. Still and all, it is time for some football! The preseason kicks off in Ninerland with the newly refurbished San Francisco 49ers facing off against their once-ascendant and cast-aside QB in Alex Smith, and the Kansas City Chiefs. They are still being led by The Walrus, Andy Reid. A coach who has been on the doorstep so much, he now has ‘Welcome’ tattooed across his forehead.

Alex Smith on the other hand is entering his 12 season, yet he is just 32.  He’s still a guy who is careful with the ball, checks down a lot, puts up solid numbers, but can’t seem to get over the ‘game manager’ moniker, and can’t seem to get deep into the playoffs. Smith may have some gas left in the tank, but it may not be in KC for much longer. The Chiefs made a bold move and traded up with Buffalo to snag Patrick Mahomes with the 10th pick in the first round.

So, I’ll be watching him to see how he looks. Trubiscuit looked good in his Bears debut, DeShaun Watson looked solid as well, even De Shone Kizer played well, but this is after all, preseason. Still and all, a lot of exciting young quarterbacks are poised to make their mark.

Us? Well, we have Brian Hoyer. ZZZZZzzzzzz. But we do have an actual offensive minded head coach. One who can design pass plays better than run to a CB and sit down. Which seems to have been our plan since Mad Mike Martz left under mysterious circumstances.

Shit, anyone see Gaine Blabbert throwing lasers for the Cards? Too funny. He did cough up a fumble deep in his own territory as well, and missed a score of easy throws . . .

Speaking of missing throws, the new Jay Cutler jerseys are hot off the presses. 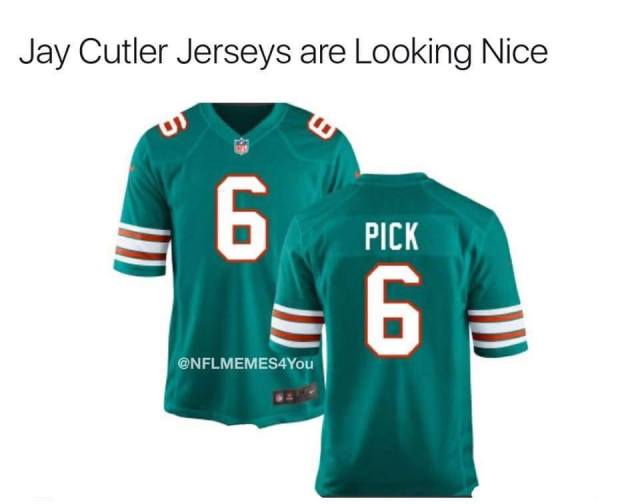