Right tackle Keith Fahnhorst, part of the dominant line of the 80s, passed away at 66. He died of complications stemming from multiple sclerosis and kidney issues. This comes eight days after the passing of Dwight Clark. Sad days indeed.  He was part of an offensive line that was built by 3 different GMs and coalesced under Bill Walsh and Bobb McKittrick’s tutelage. His 14 year career spanned the dark days of the early 70s (he was drafted 1974 out of Minnesota), and ended with a neck injury suffered during the 1987 season.

He won 2 Super Bowls, and went to one pro bowl in 1984. Super Bowl XIX. That line of Fahnhorst, RG Randy Cross C Fred Quillan LG John Ayers and LT Dan Audick did a great job of protecting Joe Montana, and the unit was one of the best in the league for many years.

Condolences to Keith’s family and friends. 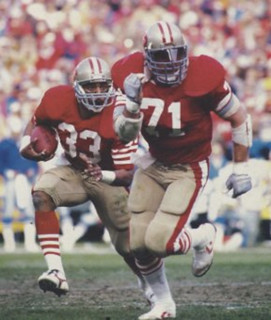 8 Responses to Lost Another Legend . . .